As regular readers will know, the 4yo loves baking. So when he asked to do some on Friday, I asked if he would like to make something for Valentines Day. We’re going to be away for the day itself, so I suggested that we make cupcakes for the family to enjoy together before we leave.

I found a strawberry cake mix, pink seeming appropriate and expediency winning as always for baking with the kids!

The 4yo poured in the oil and water and then cracked the eggs and beat them before adding them to the mixture too. Gone are the days when all he did was a bit of mixing! Next, I’ll be getting him to measure too :) The wee girl watched, and didn’t try and stick her hands into the bowl, for a change! 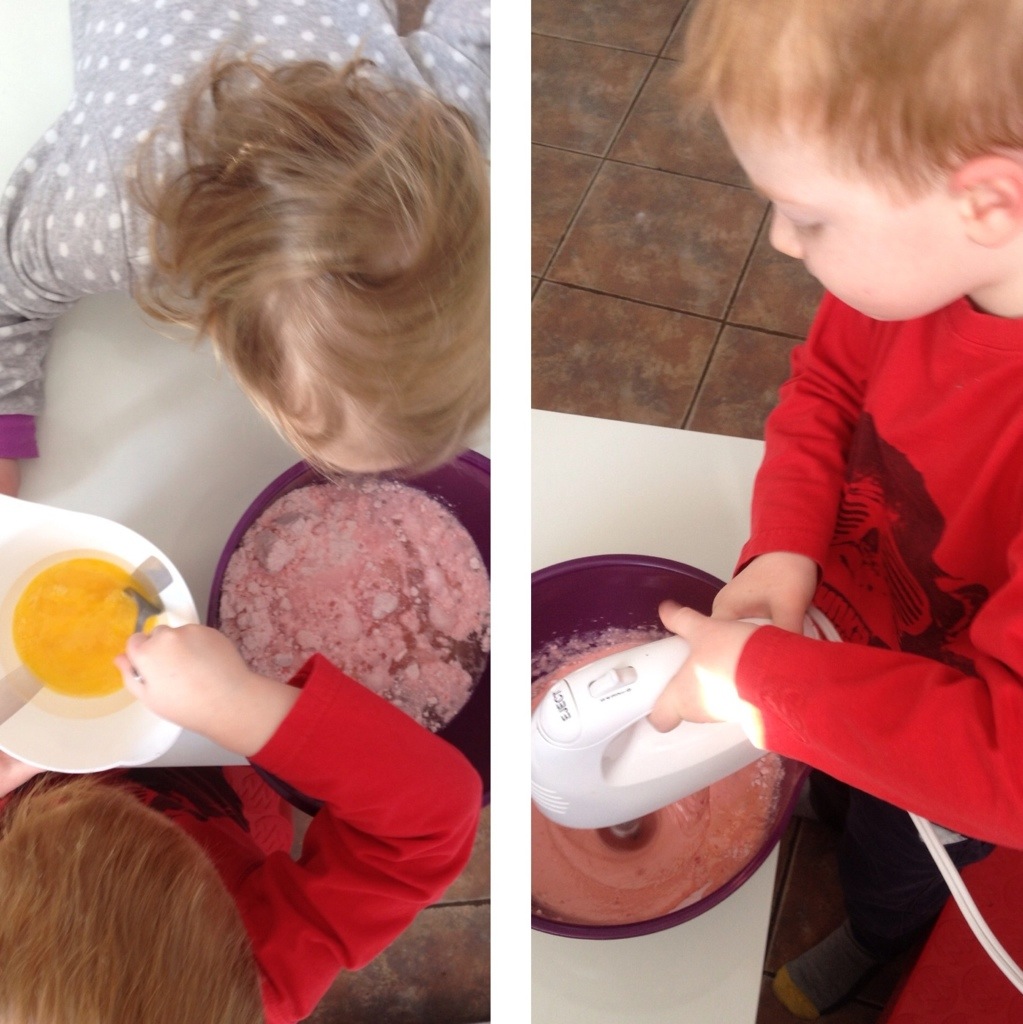 Next came filling the cases. Again, the 4yo did a lot of this himself. He put out the cases (and for the eagle eyed among you, yes they are Christmas ones, not Valentines; it was what I had!). He then filled each case with a little mixture, and I topped them up for him.

About half way through filling the cases he suddenly realised that he wasn’t wearing his hat and apron (beautifully made for him for Christmas by my sister), so we had to stop and pop them on :)

Into the oven they went, and then the 4yo had to try and remain patient while they cooked and cooled. It was definitely one of those are they ready yet? moments! I managed to get him to wait until the wee girl had gone down for a nap before getting out the icing and sprinkles. He tried very hard to do the icing himself, but the scooshy cans (again, quick and easy, and lots of lovely colours!) are quite stiff so in the end I did the icing for him, but following his instructions – he’s very particular and wanted each cake to have a certain pattern. He then did all the sprinkles.

A lovely morning activity on another snowy day. It is amazing to see how helpful the 4yo is now. It’s no longer a case of just letting him join in and trying to contain the mess. He is actually useful! And, the cupcakes were pretty good too!

I realised as I wrote this post that my 4yo really did help me. He’s come so far and is so capable now, he’s growing up so fast.