As a parent there are many choices to make. White lies to tell, stories to read, worlds to imagine and magic to create. Many points at which we have to make decisions to ensure our children’s happiness.

There are special childhood moments that simply must happen (insert your own family traditions here); for us it was the excitement of the Easter Bunny, the anticipation of the Tooth Fairy.

And, most importantly, Santa Claus (and his elves). 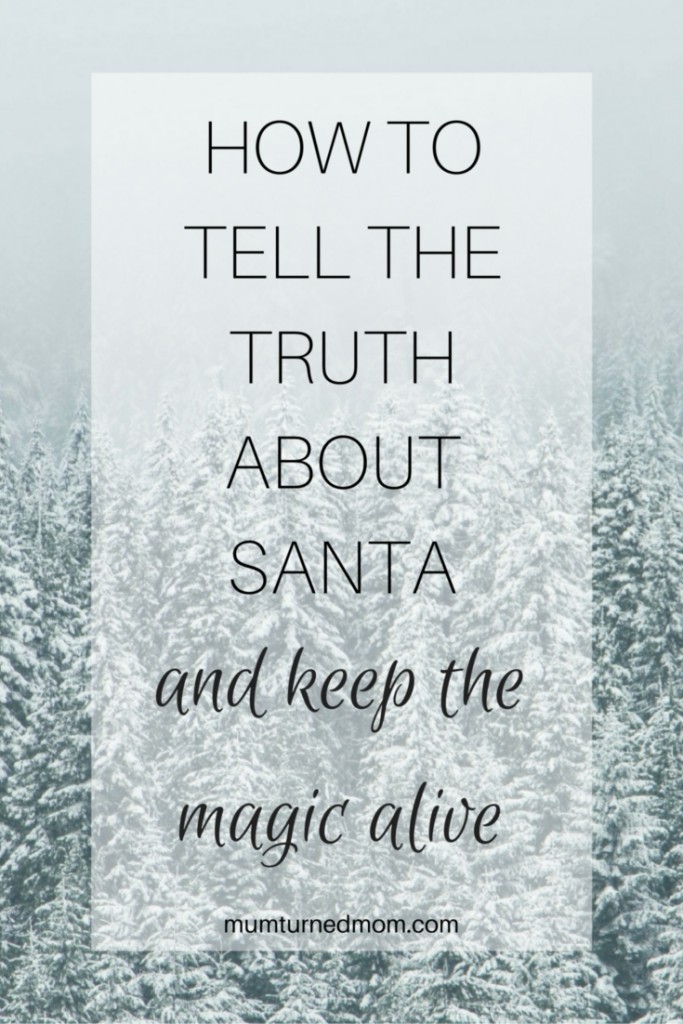 It is up to us to make our children’s childhoods magical. Their hopes, dreams and wishes are in our hands. We hold the key to unlocking their imaginations and their ability to believe and to have faith. We teach them to make their own magic. And we hope that they, in turn, will make magic for others.

So, what do you do when you realise that your child is getting too old to believe in the Easter Bunny and the Tooth Fairy and Santa?

What do you do when they start to question their existence?

What do you do when your son is one of the youngest in his class and you are desperately afraid that someone else will tell him? And that they won’t do it kindly. And that you won’t be there.

Our son is eight and half. This is what we chose to do.

On Sunday night our elf was due to make his return. We got our younger two into bed and asked our eight year old to come back downstairs for a grown up chat. We talked about some of the questions he had asked recently about Santa. We reminded him that Elfie would be coming back that night.

We explained that there are different kinds of magic. That there is a special kind of magic which parents create for their children at Christmas. We said that the responsibility for making that magic happen passes on to all those who are old enough to understand and to help.

We told him that there wasn’t one Santa, but many; that we are all Santa.

That Santa is the magic of Christmas; that he is the excitement and the love and the thought that goes into making Christmas magical for young children.

So, while Santa isn’t a ‘real’ person, he exists in that magic.

And clearly, mummy and daddy move the elf!

We explained how important it was that he kept this secret; that we felt he was grown up enough to be told and we were trusting him.

We asked if he wanted to help us make Christmas magical for his younger brother and sister; and if he’d like to help us hide the elf.

And, of course he said yes; in fact he was touchingly excited by the thought.

I’ve been conflicted on this one.

Part of me is desperate for him to stay little for as long as possible; to pretend that he isn’t growing up (into a sensible, thoughtful, responsible boy). But, a bigger part of me would have been devastated if another child had told him.

This was a difficult decision to make, an emotionally charged one. And not one we took lightly. What if we misjudged, what if he wasn’t ready for it; if he’d been upset?

Thankfully, he was as unsurprised and pragmatic about it as we had expected. But still, telling him was a scary moment.

So, while part of me is mourning the loss of this part of his childhood, another part of me is very proud of my grown up, sensible boy.

When did you decide to tell your child the truth? How old were they and what did you say? If you haven’t yet, what will make you do so?

Hello, lovely to meet you! I’m Sara, a mum of three who’s always on the look out for a quick and creative way to do anything and everything. Whether it’s make an awesome birthday cake, a fabulous dessert or a thoughtful homemade card, I’m all about easy. Join me for ideas, tutorials and stories, and let me make creativity simple!

Mum Turned Mom is a participant in the Amazon Services LLC Associates Program, an affiliate advertising program designed to provide a means for us to earn fees by linking to Amazon.com and affiliated sites. As an Amazon Associate I earn from qualifying purchases.

Signup for news and exclusive updates!