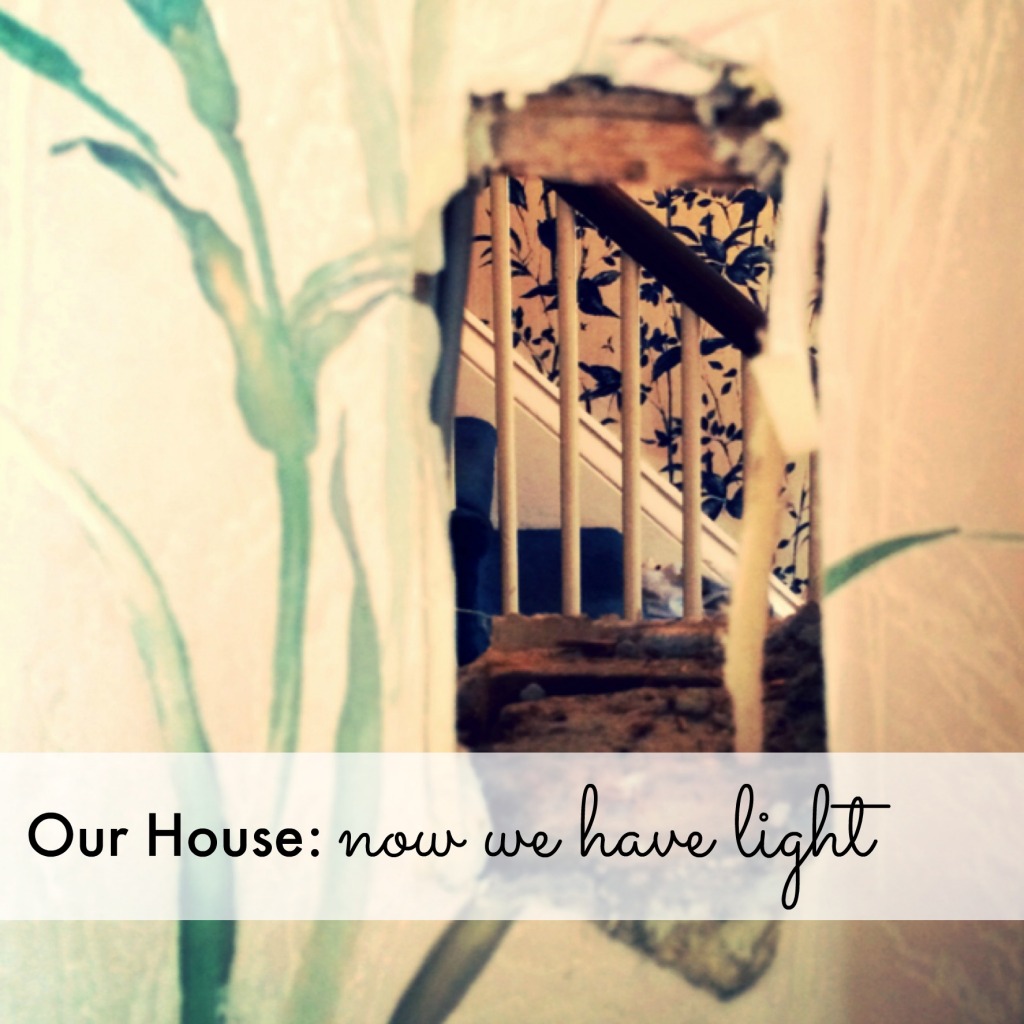 First up, I have to say that I have a long way to go in my photography of interiors… Secondly, you are about to see my house in all its messy glory; this is how it looks day to day at the moment, although I may (!) have cropped out some of the worst bits *coughs* and I am helped by the fact that we haven’t unpacked much yet. Enjoy!

We moved into the project in July. We knew what we were getting ourselves into, and we knew there would be surprises along the way. This house is one of the three oldest houses in our town. It is thought to have been built in the 1830’s and was here before our town was incorporated, and before the railway arrived!

It was built by a Captain Apthorp, and gossip suggests that he built it for himself and his fiancé before discovering that his fiancé preferred his brother… He gave them the house and built another at the top of the rocks that surround our property, and looked down on them from above. Whether or not this is true, it is an historically significant property and we are mindful of that as we begin work to refurbish and restore it.

The house is chock full of original features and it is beautiful; a classic Gothic Victorian. It is also sadly neglected, dated and in some cases in very bad repair. It is a very big house, that we were only able to buy because no one else wanted to take on the work that is needed. I’m not sure if that makes us brave or a little nuts.

After a busy summer, and busy first few weeks of the new school year, it was time to get started on the long list of projects!

To give you a flavour, this list includes: rewiring, new roof, new bathrooms, new kitchen, re-plastering and decoration of all rooms, new windows, new external drainage (a project that has begun, which you can read about here), and lots of other bits and pieces; the list gets longer day by day!

I have to admit that I have been putting off blogging about the house as I don’t quite know where to start. But, one project at a time seems sensible…

Before we can begin any redecoration, we needed to get the wiring sorted out. We knew that there was old knob and tube wiring in the attic, and we suspected that it extended down to some of the bedrooms. I had never heard of this type of wiring, but it was common in North America in the late 1800’s and early 1900’s. The biggest issue is that it wasn’t grounded/earthed… Not particularly safe!

Of course, once the electrician started tracing the wiring, it went all over the place, and served a random selection of lights and sockets on the ground floor too!

So, starting at the bottom and working up…

Our entrance hall has a beautiful chandelier, the only light fitting I will be keeping, but it was of course connected to the knob and tube. There are now a large number of holes in the walls and ceiling, and in fact you can see from the hall into the living room (as evidenced by the title photo!).

Not only is this light now safely working again, but it can be switched on and off from the bottom and the top of the stairs!

Next up, the lighting on the landing at the top of the stairs. When we moved in, there was none! One old light fitting had served this hallway, and it was no longer working. Above the stairwell there is a beautiful dome, with (we understand) a copper central panel. However, we had never seen it properly, until now…

[In case you are wondering about the plywood, the bannister is ridiculously low, perfect height for a toddler, so dangerously low from a regulatory point of view! We have built a safety barrier around it until we can get a carpenter to raise the whole bannister…]

None of the bedrooms had central light fittings; the boys bedrooms and our bedroom just had (very poor!) wall lights and the wee girls room didn’t have any light at all. Really! We had to put a table lamp in there for her.

Also, there are built in closets in each room, which are brilliant, but none of them had lighting either, which made finding clothes a little tricky on a dark morning.

Now, all the rooms have an overhead light and closet lights! The boys love the closets so much that they are currently being used as reading nooks :)

[The wee girls room, with light!] [One of the boys closets, with a book in progress…]

The electrician tackled our bedroom last. It has a vaulted ceiling (!) and he had to climb up and over it, from the attic, to install a central light and get to the lights and sockets on the external wall. Rather him than me. 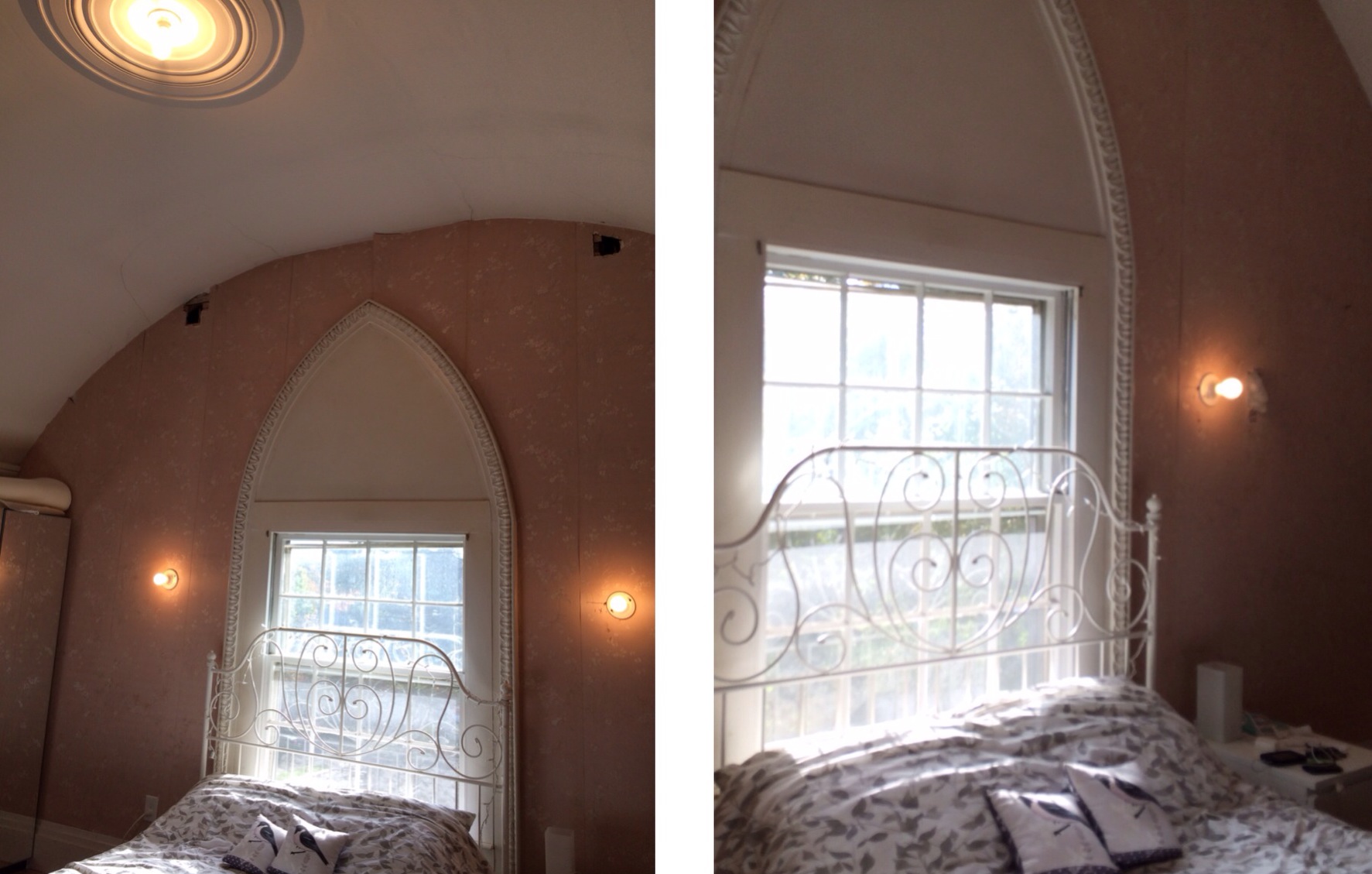 [This is one of the original carved wooden archways in the master bedroom. This one leads to a closet and the ensuite bathroom.]

I still haven’t quite worked out what I am going to put up for the central light in our bedroom… it will need to be something pretty impressive!

Regular readers may have seen the one new light fitting that I have bought, this has gone up in the living room, where it also turned out the lighting and one of the sockets was served by the knob and tube.

And lastly, one of the lights and two of the sockets in the family room were also on the knob and tube circuit. The other light and sockets weren’t. Go figure!

It is such a relief to have this work done. From a safety perspective and from a practical, actually being able to see upstairs, perspective. Turning on the (dimmable!) lights in our bedroom was such a wonderful moment, and being able to see the dome in all its (in need of repair) glory is amazing.

We have a long, long way to go with this project. But, it feels fantastic to have finally made a start. There may be holes all over the house, and I’m still fighting with the dust, but we have light!

[Despite starting with a single project, this is still an epic post, so thank you for sticking with me to the end :)]