Last year I made my younger son a Skylanders Floating Island Cake for his birthday. It was a huge success, so I had my work cut out to top it this year!

Having already made a Skylanders Portal of Power and a Minecraft Diamond Sword for his big brother, I wondered aloud on Facebook as to what I could make this time. A friend suggested a Minecraft TNT cube, which I had already been considering, but a piñata version. 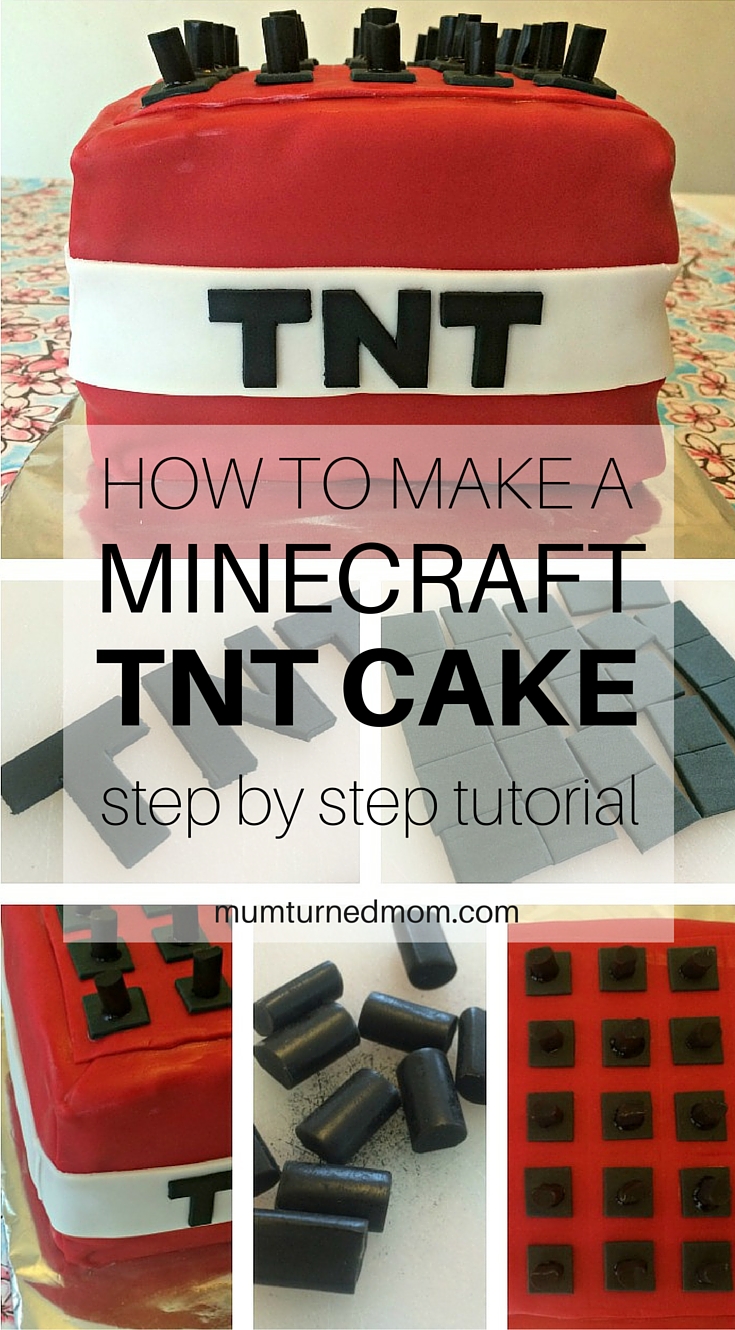 I also used fondant adhesive and a fondant roller which are handy, but not essential (you can use a little water instead as an adhesive). Also, I find that a pizza cutter is great for cutting fondant! 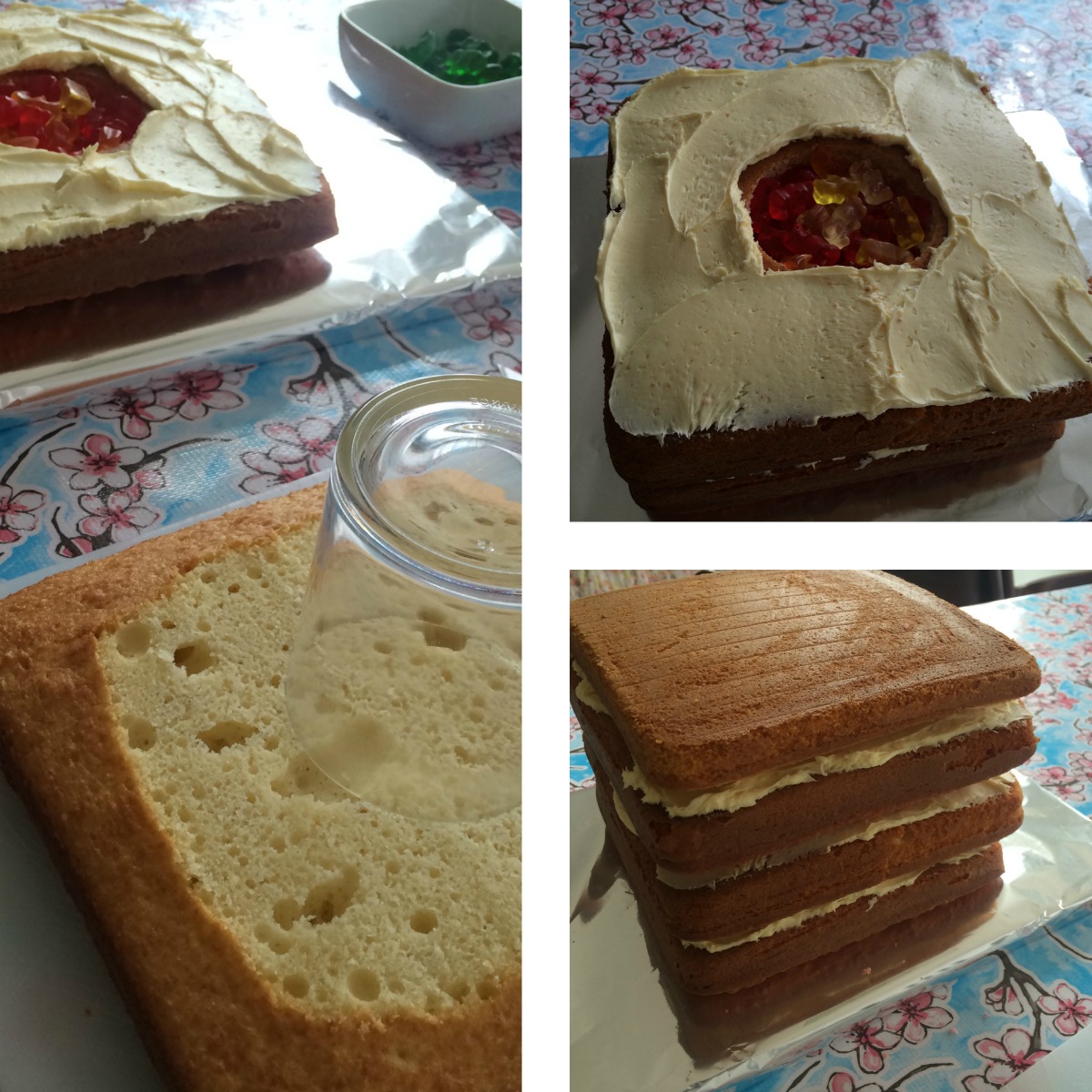 1. Bake four layers of cake, using the square cake tin. I tried to make two of the layers red, but I think I would have needed a gallon of food colouring, it stayed resolutely pink!

2. Once cooled, level your layers and then cut a hole in the middle of the bottom two layers of cake and fill with red/yellow gummy bears.

3. Layer your cake, I used buttercream to fill.

Then you are ready to ice your cake. 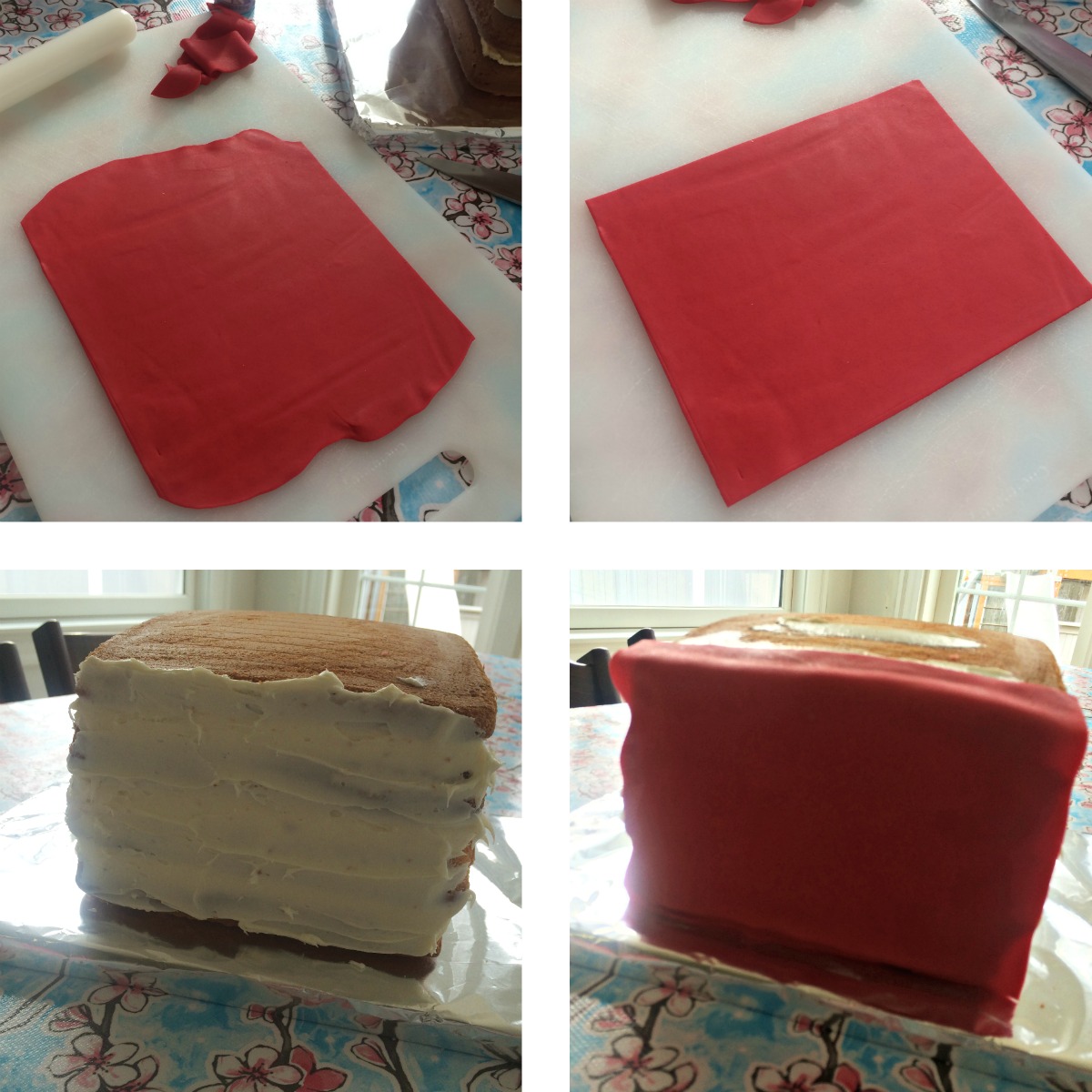 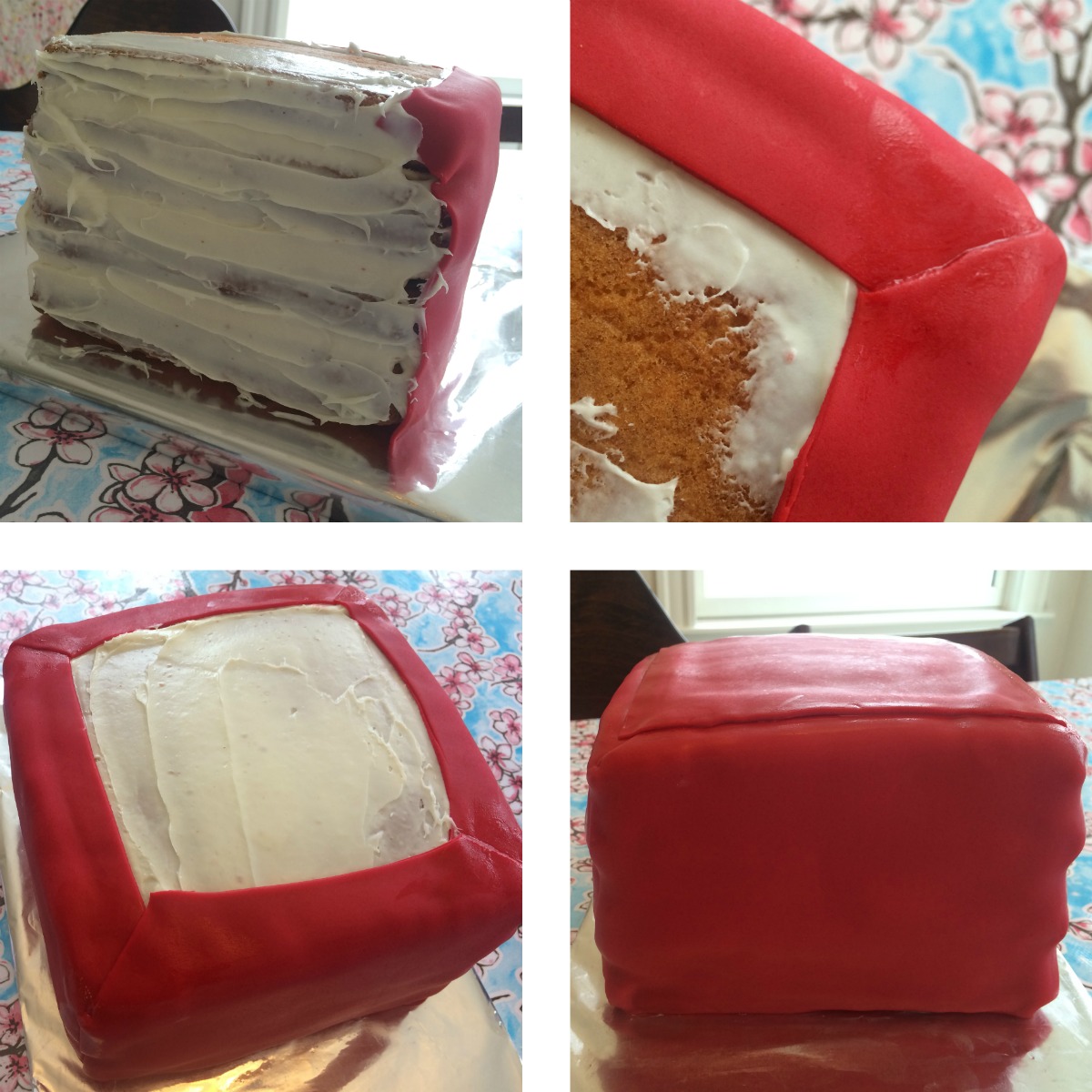 4. Dirty ice your cake, I used buttercream. I do this in sections so that it doesn’t have any time to harden before I stick the fondant on.

5. Roll out and cut a square of red fondant that is just slightly bigger than a side of your cake, and place onto the cake.

6. Continue around the cake until all four sides are covered.

7. Lastly, cut a square to fit the top of the cake.I’m sure that a professional would manage to cover the cake in one go so that it all looks much neater, but by cutting the edges carefully and using fondant adhesive, I got pretty neat joins!

8. Next, roll out strips of white fondant to make the band that goes around the middle of the block. Again, I did this in stages and used fondant adhesive to stick it to the side of the cake. 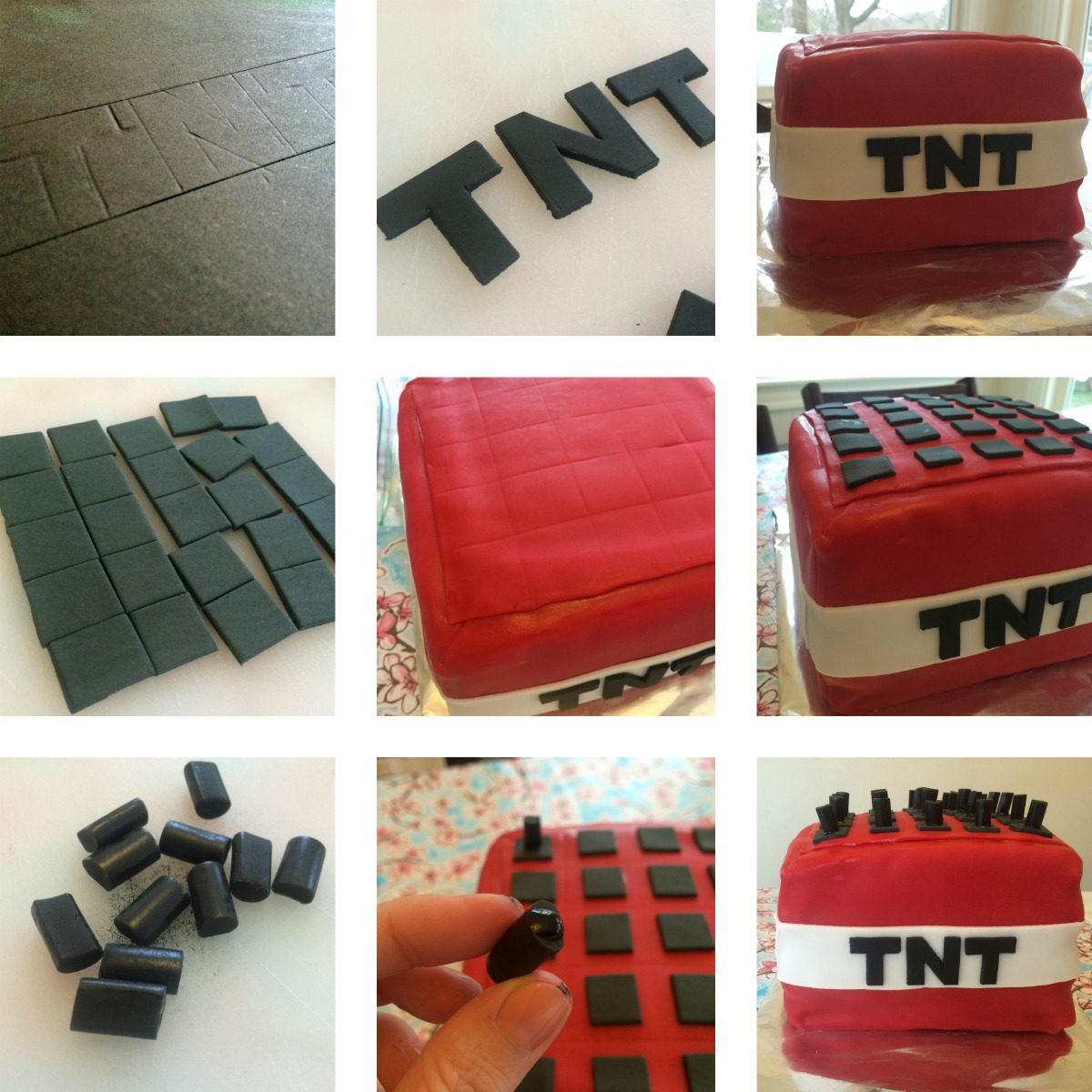 9. Roll out a strip of black fondant and mark out the letters T N T. I used a ruler to measure these out neatly so that the letters were even.

10. I wanted the square for the fuses on the top of the cake to be grey rather than black so I mixed some black and white fondant together. I went 50/50 on the amounts but I would suggest 70/30 white to black to get a better grey. Mine still looked too black!

11. Again, using a ruler to measure it out, I scored the top of the cake into a five by five grid (to give the effect of sticks of TNT). I then rolled out the grey fondant, measured and cut out 25 equal squares.

12. Using fondant adhesive, I stuck stick the grey squares into the middle of each square in the grid.

13. Using black cookie icing I then stuck a liquorice piece ‘fuse’ on to each square.

In retrospect I should have scored the sides of the cake too, to define the TNT sticks better. One of the children at the party kindly pointed this out to me! In fact, if I was making this cake again I would use an edible marker to draw on to the sides/top of the cake to give a better effect.

Despite the cake not being quite accurate enough for the Minecraft connoisseurs, it was a success and my son loved it! 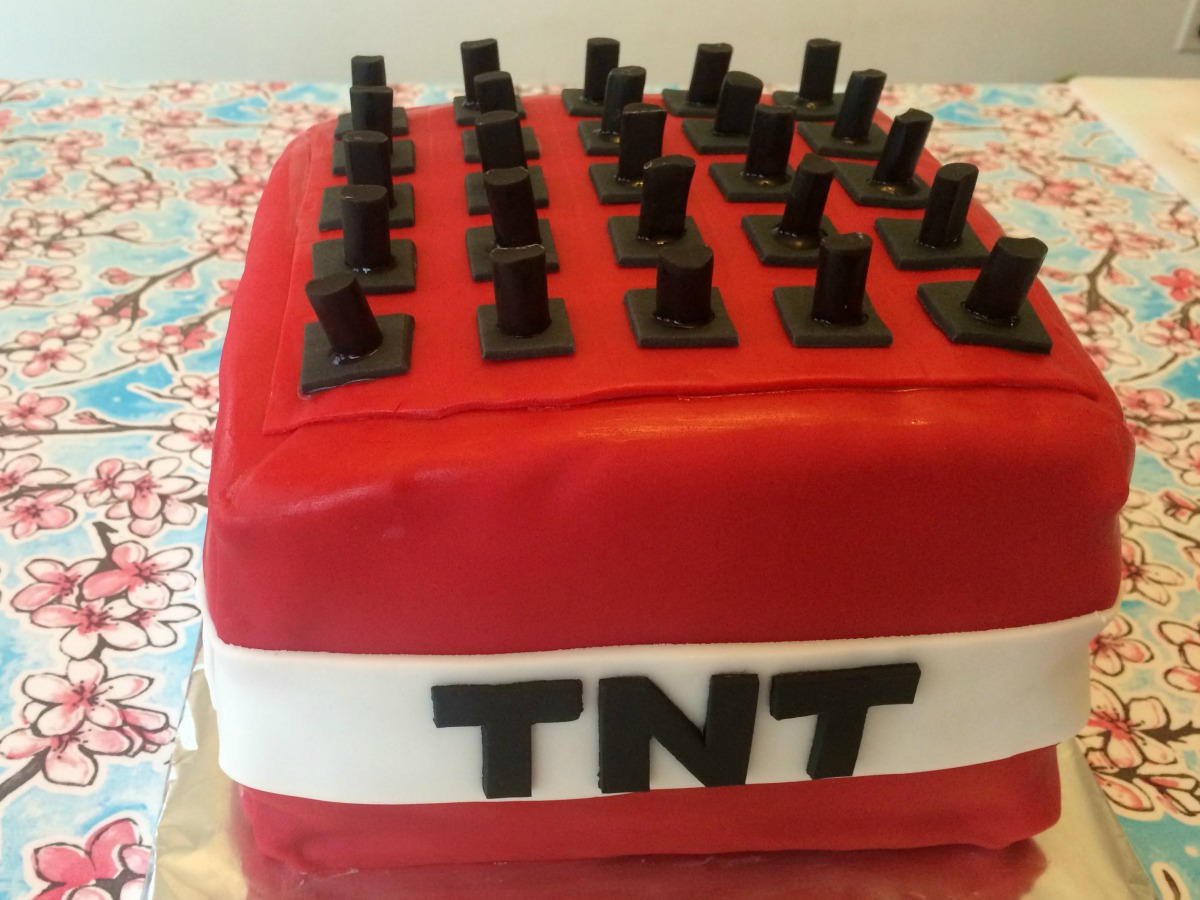 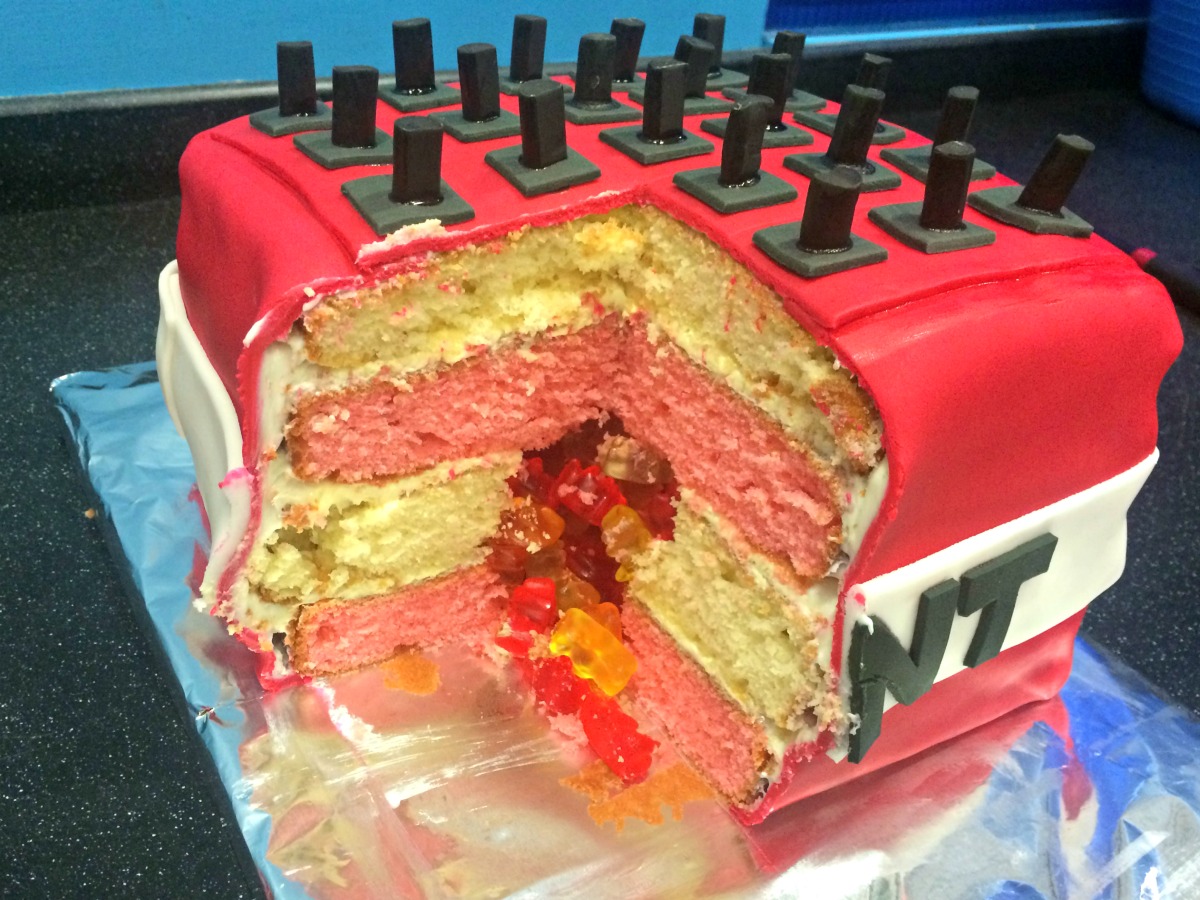 The hidden candies were a hit too :) 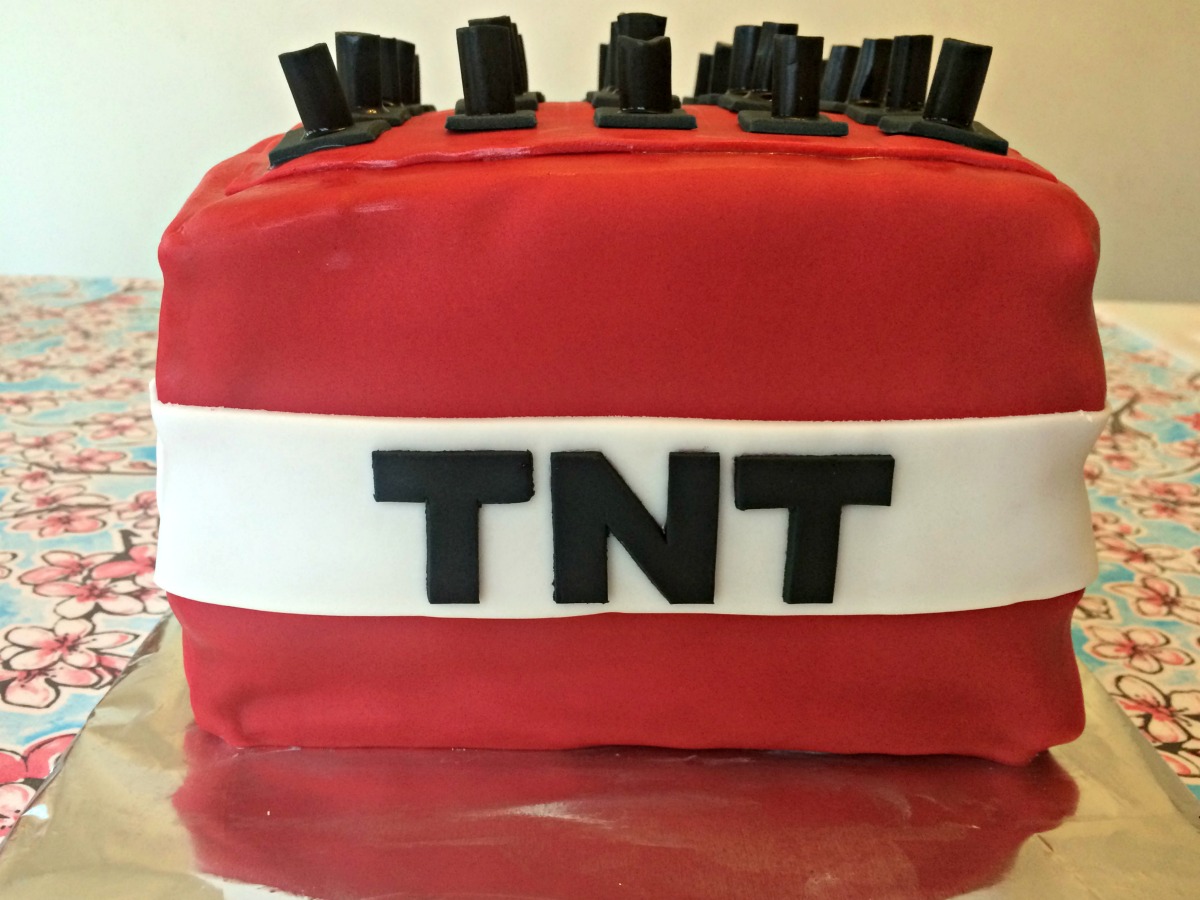 I absolutely love to see my kids faces when I bring out a cake like this, and decorating them never takes me as long as I think it might. And, it is definitely worth all the effort.

Now to work out what to make for my older sons tenth birthday next month! Suggestions on a postcard please :)

Like this? Here are some more ideas for you to try! 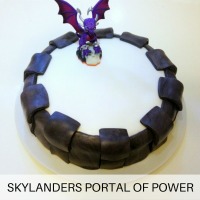 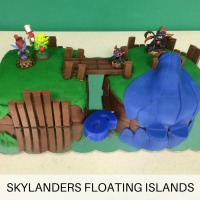 14 thoughts on “How to make a Minecraft TNT Cake”

Hello, lovely to meet you! I’m Sara, a mum of three who’s always on the look out for a quick and creative way to do anything and everything. Whether it’s make an awesome birthday cake, a fabulous dessert or a thoughtful homemade card, I’m all about easy. Join me for ideas, tutorials and stories, and let me make creativity simple!

Mum Turned Mom is a participant in the Amazon Services LLC Associates Program, an affiliate advertising program designed to provide a means for us to earn fees by linking to Amazon.com and affiliated sites. As an Amazon Associate I earn from qualifying purchases.

Signup for news and exclusive updates!