It has been far too long since we used our tuff spot, so when the lovely Emma from Adventures of Adam asked me to get involved in a Tuff Spot A-Z, it was just the prod I needed to get the tuff spot out again. The fact that I (well, my husband) had to dig it out of a snow drift was by the by!

So, here we are with M is for Mud Kitchen!

As it was my daughters third birthday, I themed the mud kitchen activity around cupcakes, with candles and sprinkles. The wee girl loved it, and made many (many) cupcakes, and used a lot of sparkly stars and sequins!

For this activity I made four different ‘muds’.

I made some fluffy stuff with shaving foam, cocoa powder and corn starch (corn flour). I made this one up as I went along (!), until I had a fairly ‘dry dirt’ consistency (much drier than I would normally make it). I used about 6oz of corn starch, a good sprinkling of dark cocoa powder for colour and scent, and enough shaving foam to leave me with a fairly soft, dry texture. [This took about 5 minutes to make.]

Next up was some dirt dough, using an idea I had seen here, although I used cocoa powder again instead of food colouring, to keep with my chocolate scented theme. I used 16oz of baking soda, a liberal sprinkle of cocoa powder and then added water slowly until it was just damp through and had a mouldable quality to it. It has a great texture! [This took about 2/3 minutes to make!]

Then came some wet stuff… For this I mixed shaving foam and drinking chocolate syrup. It was lovely and light and ‘spoonable’ without being runny. I just made a bowl full, with enough syrup to give me the colour I wanted. [This took about 2 minutes to make.]

Last up I made some chocolate playdough. I used a recipe from My Little Three and Me, although I did also add a tablespoon of cream of tartar to the recipe. [This took a little longer as I needed to measure, mix and knead, but still took less than 10 minutes all in.]

I also laid out a variety of spoons, cupcake cases and ‘sprinkles’.

As you can probably imagine, the cup cake cases were soon filled with all sorts of combinations of ‘dirt’ although spooning the shaving foam mix was definitely a favourite! The playdough became a birthday cake with candles :)

As soon as she sat down she grabbed the playdough and rolling pin!

Next, a hand went into the shaving foam… She wasn’t massively impressed with this, so after a quick wipe she grabbed a spoon!

Next she decided to fill the cupcake cases. First with the shaving foam, then with the fluffy stuff and dirt dough.

Before discovering the sparkly things!

Next up she remembered the playdough cake and made herself a birthday cake!

There was lots of spooning and pouring and decorating…

It was messy and a lot of fun!

When the boys got home from school, the 5yo was straight in there! Messy play in the tuff spot was always our thing, when he was at preschool and had a Friday off, and the wee girl didn’t like getting her hands dirty!

It was really wonderful to watch the wee girl and the 5yo play together.

It really has been too long since we used the tuff spot. This activity was fairly involved, but actually took less than 30 minutes to set up, using things I already had in the store cupboard. And, the kids played with it on and off for most of the day!

You can find all the other wonderful activities that are part of this fab blog hop on the Adventures of Adam Tuff Spot A-Z Blog Hop page! 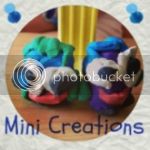 If you like my blog I would be thrilled if you would nominate me in the Writer (or Family) category.

a p r i l Signs of spring help lift the mood, but

c r e d i t Okay, so they all have their moments,

c a l m For the next few weeks, finding moments of